‘Wonder how easy it is to play God’: 2019 Ubyssey sci-fi contest runner-up

What if creating a personality was as easy as filling out a questionnaire?

By Sonia Pathak  ·  April 8, 2019, 10:28 a.m.
“I’ll just need you to sign the waiver for me, as well as fill out the desired personality modifications.” Sidd Bhattacherya

She’s making plans for her lunch break when the eleven o’clock appointment finally shows. Elizabeth Price is a quiet, meek thing, dressed in washed out florals and varnished in foundation a shade too pale for her. She’s easily overshadowed by her husband, Sheriff Grayson Price, whose hand rests against Elizabeth’s back as he guides her forward.

She sets her bag down and boots the computer back up, smiling her best customer service smile.

“Ah yes, the eleven o’clock,” she says without waiting for a response. She looks at the clock pointedly. “It’s nearly an hour past. The doctor is currently out on his lunch break, and afterwards we have a patient coming in at 1:00. I can put you down for 3:00?”

“Are you sure you can’t bump us up to 1:00...” He looks at her name tag. “...Willow? I was dropping her off when some idiot ran a red light right in front of us. Had to make a bit of a detour… civic duty, what can I say?” Sheriff Price says with a loud, bellowing laugh.

Willow certainly wasn’t going to say no to the chief of police. She nods like she’s happy to make the change and pointedly doesn’t look at his badge.

“Of course, Sheriff Price,” Willow says. “How sweet of you to drop your wife off. Are you off duty right now?”

“Unfortunately no, wasn’t able to get the time off. I just wanted to make sure everything’s in place before your surgery,” he says, directing the last bit to Mrs. Price. He kisses her cheek, and Willow watches as he ruins a spot of Mrs. Price’s immaculate foundation.

Mrs. Price nods wordlessly, and the two of them watch him leave.

Willow sets up the tablet for her. “I’ll just need you to sign the waiver for me and fill out the desired personality modifications. The doctor should be back within the hour to see you.”

Mrs. Price takes the tablet with a soft “thank you” and goes to sit in the waiting room. In the meantime, Willow dials up the one o’clock appointment to let them know they’ve been moved to three, ignoring the sounds her stomach was making.

After a couple minutes, Mrs. Price comes back with the tablet. Willow scrolls through to make sure she’s filled everything out, and spends a little more time than she should looking at the personality specs. 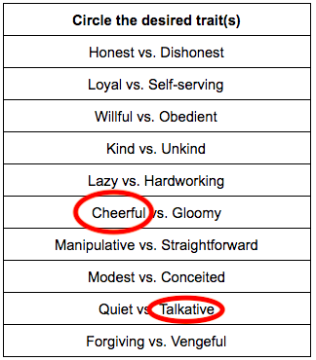 “Not a lot of modifications,” Willow says. “That’s good, the operation shouldn’t take too long.”

“It’s not the first time I’ve had it done,” Mrs. Price says. “Grayson thinks the change will be good for me. The doctor thinks so, too.”

It explains the referral in her files, but little else. Willow finds herself curious.

“If you don’t mind me asking, what were your previous specs?”

“Oh,” Mrs. Price says softly, like she’s surprised someone would ask. “Honest, loyal, obedient, and forgiving. I didn’t react very well to it. After the operation, I ended up quite despondent. The doctor thinks that cheerful and talkative should help.”

“Why,” Willow asks slowly, beginning to piece things together, “did you pick those specs? It’s a bit of an unusual combination.”

There’s a flicker of hesitation in Mrs. Price’s expression, but she’s honest. Obedient. “Grayson thought it would be a good fit.”

“Did you?” Willow asks, and she doesn’t mean for her question to come out as sharply as it does, but Mrs. Price flinches all the same.

“Sorry,” Willow says, pitching her voice into something low and soothing. “I just want to know if you’re 100 per cent sure about these modifications. You can pick whatever you’d like, after all. Are you sure you want to be more… willful?”

“I—” Mrs. Price stutters. “I don’t think I should, not without discussing it with Grayson.” Her eyes subconsciously flick to the sides, as though he were hovering right behind her, the weight of his hand against her back.

Of course, loyalty. Sheriff Price made sure to cover all his bases.

“Grayson tells me really good things about the surgery,” Mrs. Price says, picking at the threads of her cardigan. “It just didn’t go well the first time, is all.”

Of course Sheriff Grayson would be an advocate, Willow thinks. It’s done miracles for criminal reform, after all.

“Mrs. Price, are you sure you need to add talkative? We’ve been talking for quite a bit,” Willow says, not unkindly. “Sometimes, when you reinforce already existing traits, it can result in side effects like agitation, anxiety, even depression, in some cases.”

“Oh, then in that case, I’d like to change it, if that’s alright,” Mrs. Price says, reaching for the tablet.

“No worries, it’s a quick fix. I can do it for you if you’d like,” Willow says, pulling up the appropriate page. She takes the tablet pen and under Mrs. Price’s gaze, her hand deliberately spasms.

“Whoops, my hand slipped. So sorry about that,” Willow says, not very apologetically, as she erases the circle around talkative.

Mrs. Price doesn’t react at first, just looks long and hard at the list. Then, finally, she looks to Willow and meets her eye for the first time entering the clinic. “That’s alright, dearie. Thank you.” 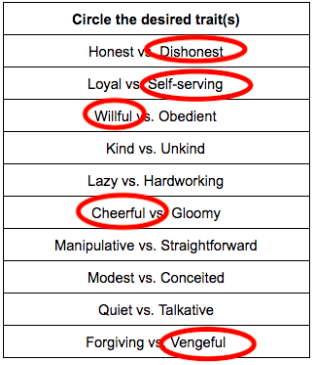 Willow watches as Mrs. Price sits back down to wait for her operation, and wonders how long it’ll take her to steal Sheriff Price’s gun and shoot him while he sleeps. She wonders if she’ll do it with a smile on her face.