Sharing the spotlight: Why Indigenous climate activism stays in the shadows

Indigenous peoples continue to advocate for the environment, despite often being overlooked by media and here at UBC, and as first-year Allard law student and Kennedy’s sister Justice Tuccaro says, they’ve done so “since time immemorial.”
Andrew Ha 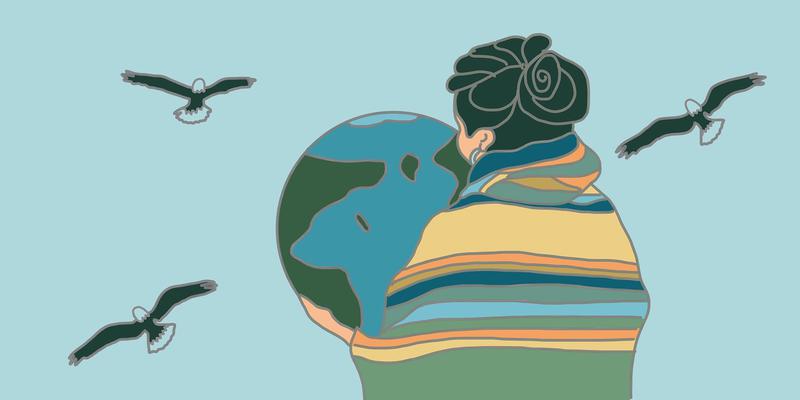 Kennedy Tuccaro found herself barely able to move as she photographed signs held above thousands of people packing the plaza outside the Nest at the UBC climate strike.

She saw people file onto buses, their signs and faces pressed up against the windows, while others joined bike brigades trailed by balloons — all headed to the art gallery downtown to unite with strikers from across the city.

“Everybody came out from the fringes of their environmental clubs … and were able to all come together,” the 20 year-old third-year environment and sustainability student said. “It was a big moment. A very big collective happiness for sure.”

The strike marked a big moment for Kennedy. While she couldn’t make it to the Vancouver strike attended by Greta Thunberg, she was surprised that Thunberg stopped in Alberta to meet with the chief of her band, Mikisew Cree First Nation.

Although millions look up to Thunberg as the face of the climate movement, she’s only bringing awareness to a longstanding concern. Indigenous peoples continue to advocate for the environment, despite often being overlooked by media and UBC; as first-year Allard law student and Kennedy’s sister Justice Tuccaro says, they’ve done so “since time immemorial.”

So why does the spotlight land squarely on Thunberg?

In Canada, 15 year-old Anishinaabe activist Autumn Peltier was heralded as a ‘water warrior’ for her internationally recognized advocacy a year before Thunberg rose to fame.

Many Indigenous people have spoken at climate strikes, including associate professor Sarah Hunt at UBC. In Vancouver, Chief Judy Wilson of the Neskonlith First Nation gifted Thunberg a scarf that the teen then wore as she spoke, and in Edmonton, nine year-old Cree singer Noah Simon performed before Thunberg took the stage.

But Indigenous people haven’t received anywhere near the attention that Thunberg has. They often serve as opening acts before the main event: a Greta Thunberg speech.

“I think that it’s amazing how far she’s come for how young she is,” said Justice. “But at the same time, she should not be the sole focus of this whole entire movement.”

While Kennedy applauds Thunberg for highlighting the names of Indigenous activists, she says it’s “unfortunate that it has to be a big name that calls attention to what Indigenous people have been fighting for for a very long time.

“I think it is the responsibility of those that have a lot of spotlight and have a lot of influence to give more power to those who may not necessarily have it,” said Kennedy.

Both Kennedy and Justice believe that the issue lies in colonial history. Justice says this is part of society’s ignoring of Indigenous voices that has happened for years.

“That it’s come to the forefront of worldwide news because of the spotlight that was put on a European girl … reflects this colonialist structure that we can only really pay attention to these problems if they’ve been exacerbated by someone who has the ability to be in the forefront of these headlines,” she said.

But Thunberg’s reputation does bring benefits. Kennedy doesn’t blame Thunberg for her stardom — instead, she sees it as a positive.

On a small scale, Kennedy raises awareness through her work with beeswax wraps. It’s a new product intended to replace plastic wrap, which she says provides an opportunity to bring up climate issues with curious customers.

Kennedy says that there is “a lot more that could be done” by climate movement organizers to include Indigenous perspectives, but acknowledges the importance of Thunberg’s limelight: “Any attention is good attention.”

But 21 year-old Reeva Billy doesn’t think there’s space for her in the movement.

The third-year First Nations and Indigenous studies (FNIS) major says she isn’t involved with the climate movement at UBC because, perhaps due to her personal bubble, she and people in her circle haven’t heard of any climate opportunities for Indigenous people on campus.

Her activism happens outside UBC. Of Squamish, Yale and Nuxalk heritage, she’s an avid war canoer and has been involved with the tradition since she was two or three years old. Nowadays, Billy trains young canoers at her family’s canoe shed in North Vancouver. But in her memory, the waters have always been far from pristine.

“We would find oil slick in the water, different pieces of trash, used contraception and that kind of thing,” she said. “So when we’d find things that we felt safe touching, we’d pick it all up … We’d put it in our canoes, and we’d practice with it and then bring it back in and throw it in the trash or recycling.”

She feels “hopeless” about the future of the canoe shed as sea levels continue to rise. “It makes me feel powerless to what’s happening because I know the Earth wasn’t like this pre-colonization and everything. It feels disrespectful.”

From awareness to action

While spreading awareness is crucial, many are calling for the lack of Indigenous spaces in the movement to be addressed.

According to Dr. Candis Callison, faculty member in the UBC graduate school of journalism and the Institute for Critical Indigenous Studies, the focus used to be on attracting policy makers’ attention through public awareness, but this philosophy has changed since she began her climate research at the turn of the century.

“Now you have a lot more public awareness, but how is that translating into action?” she said.

In her work on Indigenous media representation in the climate crisis, she explains that Indigenous peoples are disproportionately impacted by global warming because they often live outside of urban centres — in Northern Canada and the Arctic, for example, where melting ice raises sea levels and impacts food systems.

Despite this, Indigenous peoples are “very underrepresented” in the “celebrity-focused” media which often relies on headliners to prop itself up. She notes a lack of Indigenous voices in coverage of the UN Climate Change Conference held December 2019 in Madrid.

“That said, there are more stories than there have ever been,” she said. “And at the same time, those stories still … struggle with fitting into very neat narratives where Indigenous people are either heroes or they’re victims.”

And there continues to be a diversity of responses Indigenous communities have had to the climate crisis, but media needs to pick up the slack, she says.

“In my experience and from people that I’ve talked to … sometimes they don’t feel like we have space here at all,” Justice said.

Going beyond perfunctory land acknowledgements, Billy thinks UBC should do more by co-organizing events with the First Nations whose territory the university sits on.

Since 2018, Dr. Sheryl Lightfoot, senior advisor to the president on Indigenous affairs, has overseen the creation of UBC’s Indigenous Strategic Plan (ISP) to implement the United Nations Declaration on the Rights of Indigenous Peoples (UNDRIP) after a provincial mandate. The ISP, currently in a draft stage, is intended to replace the university’s 2009 Aboriginal Strategic Plan (ASP).

“There’s nothing wrong with [the ASP],” she said, explaining that the ISP would address a shifting atmosphere around reconciliation. “It’s just that it’s reflecting a different time.”

But a December 2019 draft of the ISP had a notable omission: there was no mention of the climate crisis in the 38-page document, aside from a brief list describing a Land and Food Systems program curriculum.

Lightfoot says that the ISP team collaborates teams working on the Inclusion Action Plan, the Climate Action Plan and the International Strategic Plan. Although the three plans often intersect, this is because none wants to step on the toes of another.

“Each of these plans is working in a realm. And so I think the basis of working has been that we respect those realms, and then we come together to talk about how they intersect and how we can help one another in advancing them all.”

But to what extent can UBC pursue reconciliation if its guiding plan leaves out the environment?

Callison says the question of how focused UBC is on climate in relation to its commitment to issues affecting Indigenous communities “needs to be asked often.” With the climate’s uncertain future, traditional knowledge of the environment gives not only a historical context to understand the crisis, but a resource that the university can integrate in its planning.

In other words, a document such as the ISP would benefit from a link to the climate crisis, especially when Indigenous ways of life are so closely linked to the environment. And the ISP aims to implement UNDRIP — several articles of which address Indigenous peoples’ right to environmental sustainability.

Billy agrees. “The way that they’re approaching their relationship with Indigenous people is fragmented,” she said. “They’re not looking at the whole picture here.”

Lightfoot says she’s open to including that reference. However, she wants to avoid being “top down,” instead waiting for community feedback on what should be included.

Whether it be at UBC or in the wider climate movement, a dearth of opportunities for Indigenous peoples to take space continues to be felt. Although media coverage has changed, the climate movement still misses out on Indigenous voices and traditional knowledge that could be key to addressing the crisis.

For Billy, the outlook of her canoe shed is grim if the crisis isn’t addressed. Her father told her of a dream where he walked through a newly built canoe shed of cedar with lights shining within. He was old, so there was a strong woman by his side helping him walk through the shed. That woman? He thinks it’s Billy.

And so she and her brother are tasked with determining the future of the shed if sea levels force them to relocate.

“It’s only about four metres above the [sea] level,” she said. “And it should be thoroughly underwater by the time 2050 is here, which means that we’ll have to relocate and then we’ll have to pretty much uproot our lives when it comes to canoeing.

“I wish I could be that Indigenous student who’s like ‘if we work hard enough, we can make a difference.’ But I’m working my hardest to be a part of a different cause.”